Silly Timmy adapted for use in Pakistan 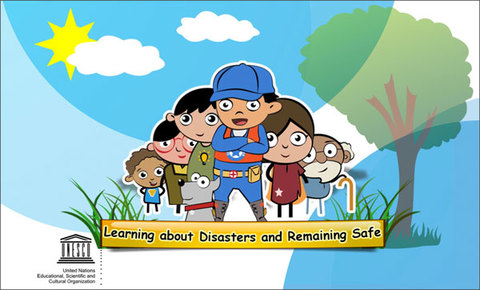 As you are probably aware, I created a comic aimed at helping younger children learn about appropriate behaviour and actions, before during and after disaster events called Silly Timmy. It was first published through here and on Facebook and has been translated into other languages, including Turkish, Indonesian and Fijian. It was also adapted and used as part of pilot project looking at how to help kindergarten students understand how to prepare for and respond to a select range of hazards in Iran. The link for the paper is here >>.

Some time back, I was approached by someone from UNESCO in Pakistan asking if they could adapt for local use, which of course I said yes. I hadn't heard anything in over a year but a web search I was carrying out caught my eye as it mentioned my name and Lo and Behold, there was the adapted UNESCO comic! I thought I would share the link with you so that you can see for yourself how they have used all of my montages and story lines to produce this for Pakistani children in schools affect by disasters. I hope to carry out research on how it is being received, used and the extent to which it does/does not impact learning with regard to disaster safety and preparedness, as well as if there its any positive impacts on the wider community! I am however, a little disappointed that the principal character that offers advice to what was Timmy, but is now Bablu is a male character and not a female one, as was originally, especially as strong female role models are important and were central to my original comic!

You can download the PDF book by clicking on this link>> but be aware that it is currently 27.5mb as I think it will be printed and so needs to be of a high resolution!

This profile of Uganda showcases its efforts in domestic and international adaptation.

This report attempts to equip urban decision-makers with evidence­based climate information tailored to their specific context, to adequately adapt to and prepare for future climate change impacts.

The Climate Service Center Germany (GERICS) was initiated by the German Federal Government in 2009 as a fundamental part of the German high‐tech strategy for climate protection.

This document showcases some of the measures which have been successfully implemented by Indian and global cities towards mitigating floods and building water resilience.

In this report, the Subregional Office for the Pacific of the United Nations Economic and Social Commission for Asia and the Pacific (ESCAP) pulled together the latest reports and evidence on climate change in the Pacific subregion.