Teaching of Tendenko saved lives of school children in Japan

The article below is from the Daily Yomuiri online and explains how an education programme based on one word and integrated into other parts of the curriculum was effective at saving lives and enabling children and youth to know how to respond and to do so without hesitation. Clearly these students had developed a strong belief in their own ability to act (sometimes termed 'self-efficacy'). Very inspiring and useful to follow up as a researcher.

Local wisdom a lifesaver for kids Sho Komine and Yasushi Kaneko / Yomiuri Shimbun Staff Writers
MORIOKA--The wisdom known on the Sanriku coast--the Pacific side of the Tohoku region--as "tsunami tendenko" saved the lives of many children in Kamaishi, Iwate Prefecture, when the massive earthquake and tsunami struck on March 11.

Of 2,900 primary and middle school students in Kamaishi--where more than 1,200 people died or are missing--only five children who left school early or were off sick on March 11 were confirmed dead. However, nearly all the other students were confirmed safe.

Since 2005, the Kamaishi city government has invited disaster management education experts to offer advice, and among the lessons' important points was "tendenko"--a word coined from the city's long history of repeatedly being hit by tsunami.

The word means to "go uphill independently at the time of tsunami caring only for your own safety, not thinking of anyone else, even your family."

On the afternoon of March 11, about 80 percent of the 184 students were on their way home from Kamaishi Primary School due to a reduced-hour schedule toward the end of the semester. Tsunami hit many school zones except on the mountainous side of town, but all the students were safe.

"I was worried about my house and family, but I ran up to a higher place without thinking," said sixth-grader Hibiki Fujimoto, 12. He said he was with his friends playing in a residential area near the school when the earthquake hit the city.

Prof. Toshitaka Katada of Gunma University Graduate School, a disaster social engineering expert, said: "Tendenko is the wisdom based on trust within families. It has a very deep meaning."

According to Katada, who advises Kamaishi on disaster management, at the time of the 1896 Sanriku earthquake, family members tried to help each other but ended up failing to escape from tsunami that destroyed the entire region.

The word "tendenko" was developed in Sanriku as a lesson from such disasters.

Katada has taught tendenko's importance since 2005 in Kamaishi, offering a special class at 14 primary and middle schools in the city.

"You might feel bad escaping tsunami alone. However, trying to confirm families' safety and whereabouts is the most dangerous thing one can do in such a situation. It's important that you mutually believe that 'They must've evacuated somewhere,'" Katada said.

Kamaishi schools conduct disaster drills to go uphill, teach tsunami velocity calculation methods in math class and discuss tsunami experiences during ethics lessons. The schools also encourage students to look for higher ground where they can evacuate on foot, and include evacuation routes in a disaster management map.

The point of tendenko is to stop looking for family members who are geographically far from each other at the time of a tsunami. However, the concept fosters a spirit of mutual aid among the people who are nearby.

Katada's instruction helped primary and middle school students cooperate with each other to escape the disaster.

Tsunami hit the Unosumaicho district in Kamaishi, with floodwaters reaching the third floor of Kamaishi-Higashi Middle School and the nearby Unosumai Primary School. Before the latest earthquake, the two schools jointly had conducted disaster exercises.

At the middle school, the announcement system malfunctioned right after the earthquake and become unable to broadcast evacuation calls. However, students were able to quickly leave the building and gym as they had practiced, and grabbed the hands of primary school students--who were also on the verge of escaping from the building--and together ran up to higher ground.

On their way up the hill, one of the girls cried and started hyperventilating, while the other became unable to speak.

"It's OK," Dote told the girls as they ran to the top of the hill, more than two kilometers from their schools. Once confirming the safety of all their friends, the girls looked relieved, Dote said.

Said Katada: "I've repeatedly told children in class that we might experience tsunami larger than ever expected. It's almost a miracle that this many children were saved. I'm proud of the children for making [lifesaving] decisions on their own."

You are welcome! I hope it goes well! I'm writing my PhD upgrade at the moment, then on to ethics approval and fieldwork hopefully in April! I'll claim that drink if I'm ever down your way!

Unfortunately in another part of Japan affected by the tsunami, school reunification procedures may need to be rethought after it may have contributed to the deaths of children and their parents, as seen in this article below: 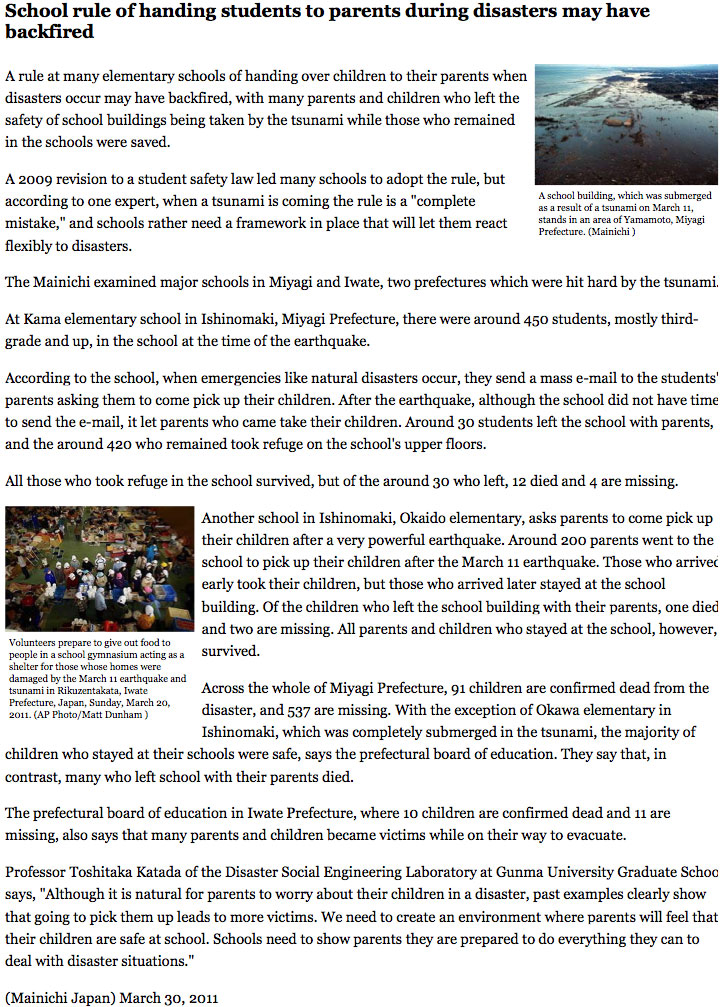 Comment by Justin Sharpe on April 18, 2011 at 23:23
I have found another article from Asahi Shimbun newspaper which supports this and also talks about importance of curriculum (10 hours a year on disaster preparedness) as well as regular drills.

KAMAISHI, Iwate Prefecture--When the school building started to pitch and sway violently, Yuta Furusaki and his buddies knew exactly what to do. The 14-year-old junior high school baseball team player and his teammates had just started practice March 11 when the Great East Japan Earthquake hit. As soon as the rocking stopped, someone shouted: "First, let's get out of here!"

No sooner had boys rushed out into the open than they were joined by the rest of the students at Kamaishi-Higashi Junior High School, and they all headed to higher ground.

Next door, pupils at Unosumai Elementary School initially rushed to the third floor of the school building. But when they turned around and saw the older kids gathering in the schoolyard and preparing to flee, they, too, joined the pack of children heading for an elderly nursing facility on a hill about 1 kilometer away.

When the children saw the waves closing in from behind, they did not wait for instructions from the teachers: They kept going, trying to reach a safer elevation.

About 10 minutes later, both school buildings were engulfed by the tsunami that followed the magnitude-9.0 earthquake. The water quickly rose to the third-floor level.

"We grabbed the hands of elementary kids in the lower grades and an old woman nearby, and just kept running," Furusaki said.

After stopping briefly, they were sent running again, this time toward the mountains, after hearing a voice shout out a word they had heard many times before: "Tsunami!"

"We were always told to head for higher ground, and that is what we did," Furusaki said.

Thanks to repeated tsunami drills, all of the 212 junior high school students and 350 elementary school children on the site managed to escape the first wave of tsunami to hit Kamaishi, a city located on the jagged estuary coastline of Iwate Prefecture.

A similar situation played out in many other schools in the city, which knows only too well what devastation can be wrought by tsunami.

The city was pummeled in 1933 by the Showa Sanriku Tsunami and in 1960 by a massive tidal wave triggered by an earthquake off Chile.

Out of a total 2,924 elementary and junior high school children in Kamaishi, only five have been reported dead or missing in Japan's worst postwar disaster. Of the five, four had been absent or had left school early. One disappeared after being reunited with family following the dramatic escape from the tsunami.

Since 2004, school officials have staged numerous drills to teach the children what to do if a tsunami hits.

Toshitaka Katada, a professor at the graduate school of Gunma University who specializes in disaster social engineering, has served as an adviser for disaster and crisis management to the city since last year.

Katada penned a manual for teachers and has been instrumental in making sure that about 10 hours each year are devoted to disaster preparedness education.

Three key points that Katada taught the children are:

When an earthquake occurs, don't try to go home, but head for higher ground;

Don't place blind faith on prepared hazard maps but rather, evaluate the situation with your own eyes; and

"We have succeeded in raising awareness among the children. The next step was to share that information with entire neighborhoods. Unfortunately, we were still halfway in achieving that when the tsunami hit," Katada said.

Katada remains optimistic about the future.

"As today's children grow up and become parents, it will be up to them to pass on their knowledge and experience to the next generation," he said.

(This article was written by Atsushi Yamanishi and Yasushi Okubo.)

Comment by Justin Sharpe on April 18, 2011 at 23:18
I'm convinced this is important as students showed they had belief in their actions and stuck to them, whereas some parents and their children who came to collect children from school unfortunately fell victim to the tsunami. More on this tomorrow.

This is the MOST important thing I've read about disaster prevention education, maybe ever.  Can we give this a prize? This is more important than the Tillie Smith story, and more important than poorly re-told "Imamura-no-hi"!! This one seems proof that PUBLIC EDUCATION IS POSSIBLE AND EFFECTIVE!

We need this translated into Russian, Uzbek, Kazak, for those areas downstream of vulnerable dams and debris flow in Tashkent and Almaty. We need it translated into Spanish for Southern California.

Let's learn the Japanese characters for it and make a poster out of it.